Here are my reflections on attending the DEMF/Movement 2007 festival on Saturday, May 25, 2007.

1:15PM – Arrived in downtown Detroit, park in the underground lot where I always park for the festival. It’s $10 this year – seems like it wasn’t that pricy before. Ah well.

1:30PM – Park myself directly in front of the stage in the Beatport tent and watch as Pole begins. His first two tracks pretty much melted my face. The bass was staggering, it sounded like the Pole of days past. After that, he veered into what sounded like his newer material, based on the bit I’ve heard. It was decent – nothing I’d seek out, but enjoyable. He played one track that sounded like Pole’s take on west-coast rap instrumentals, with this sort of Moog-sounding synth part. That description might steer you a little off, but it’s close, I guess. He finished up with some noisier dub pieces, and it was quite good. A great start to the day’s music. 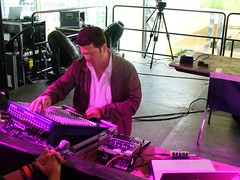 2:30PM – Watch as Sassmouth begins her set in the Beatport stage, and head out after 10 minutes or so. What I heard was fine, but I wanted to check out Higher Intelligence Agency, who was playing on the Pyramid Stage. I meet up with Jeff Kleine, and we head over together. 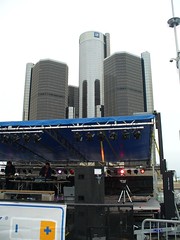 2:40PM – Oh my. The sound system at the Pyramid Stage is absolutely stunning. The high-frequency drivers literally looked like none I’ve ever seen before, and the sound is just unreal. Super crisp, clear, plenty loud, and the bass just envelopes you. Each side (left/right) has a front stack, two side stacks, and a rear stack. Standing in the middle is really the sweet spot – the bass hits, you get an awesome sense of the stereo imaging, and it really can’t be beat. The music is a great compliment to the system – deep bass and kick drums, clean, clear synth parts, and even some nice field recording noises at times. Bobby Bird (HIA) looks like he’s having the time of his life during his set, too. Jeff and I both really enjoy this set. 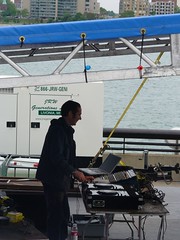 4:00PM – HIA finally wraps up, and Rhythm & Sound starts. This is one I’ve been anticipating, and there on the stage are two grizzled-looking Berliners, Mark Ernestus and Moritz Van Oswald, with a box of dub 7″s and a pair of turntables. A mic and Powerbook lay on the table next to them, awaiting the line-up of 3 toasters who will eventually accompany the pair in their selections. As the set progresses, it becomes clear that they’re in no hurry (they have 6 HOURS on this stage, after all) and a steady stream of slow, grooving versions and vocal tracks get played. 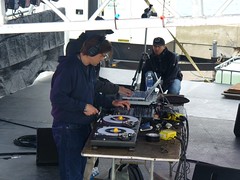 4:30PM – Some food is in order, so I skip over to the Ren Cen for an ATM, then back to the festival for a corn dog. Mmmmm, corn dog!

4:30PM – Back to Rhythm & Sound. The toasters are in full effect, though at times they’re detracting from the experience – a bit too much banter about “rhythm & sound, the sound system, feel this experience, etc”. I like the DJ role in all this, but I’m here to hear the selectors, too. 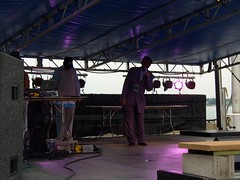 5:10PM – Over to the Beatport stage for Losoul. I saw him setting up while Pole finished, and he’s got an interesting rig – Sequential Circuits Studio 440 (an ancient sampler that takes floppy disks and has analog filters), a Novation Remote 25 controller, and a laptop. I own a couple of Losoul records that I like, which have some zip and funk to them, but this set turned out to be fairly sterile. Lots of kick drum, synth noise, rinse, repeat. Ho hum. 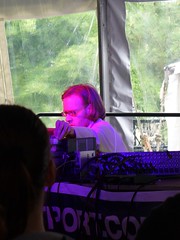 5:30PM – Back to Rhythm & Sound. The vocalists seem better integrated now. Some nice songs. Nothing from the Burial Mix catalog (what I would give to hear “Ruff Way” or “Never Tell You”!), but a good dub vibe. Fred Heutte is here now, too, and we all vibe off R&S. 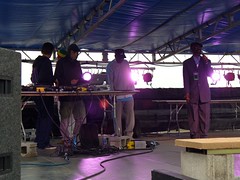 6:00PM – Over to the Real Detroit tent to hear Anthony “Shake” Shakir. Shake had kind of a rough set – his multiple sclerosis seems to have made a lot of the necessary energy and fine movements difficult, but there were glimpses of his stunning past DJ sets in this set, bits like finding the groove in doubles of Rob Hood’s “internal empire” and working it, or dropping “Shades of Jae” at just the right time. It was great to see him really having fun, though there was also obvious frustration at times, too (partly due to what I think was an unfamiliar mixer, or possibly something wrong with it). 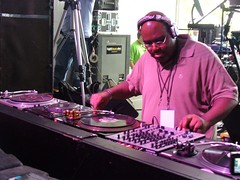 I’ve said it in the past, and I’ll say it again – I just love Shake, and I really enjoyed seeing him play. He’s been a huge inspiration to me musically. 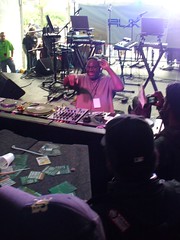 7:00PM – As I walk back to the car, the rain starts to come down with slightly more force. It’s held off all day, but is finally starting to rain, and I watch the lights, and the people, and hear the thud of kick drums gradually fade. It’s time to go home. 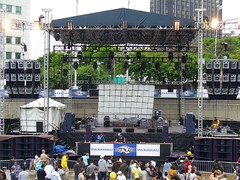 You can see all my pictures from this at my Flickr site: